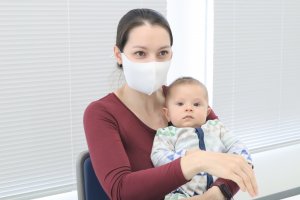 Anna Anikeev, a Russian beauty with impressive eyes, made her appearance with Tim, a 3-month-old baby, in a stroller. She is an architect, a career mom who is currently taking a maternity leave.

She answered our questions well while taking care of Tim.

How does Anna, an architect, who speaks Russian-English-Japanese and has been living in Japan for nine years see Japan? 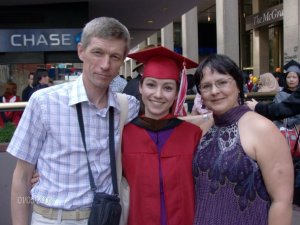 I was born and raised in Kazan, the capital of the Republic of Tatarstan in Russia. Kazan has the same pronunciation as “KAZAN” (volcano) in Japanese.
The city is the third-largest city in Russia and has developed in recent years; it is renowned as the sports capital of Russia, having hosted the FIFA World Cup in 2018.
I moved to the USA in later years after living in England, Canada.
After graduating from a graduate school in the USA with a Master’s degree in Architecture, her husband and she came to Japan in 2012 because Japan looked interesting.
There are four people in her family: her Russian husband, 7-year-old daughter, and Tim.
We speak Russian at home. My daughter speaks Japanese at school and I speak English, Russian and Japanese at work.

First, Japan is surprisingly safe. I was amazed that children can go to school by themselves and can do many things without supervision. Nobody would steal a stroller even if I left it in the park.

Second, Japan’s medical system is good. My daughter was born 2 years after our move to Japan and I became a single mother. Then, I was forced to decide whether we should go back to the USA or stay here. I decided to stay because of Japan’s favorable medical system where medical expenses for children are free until the third grade of junior high school. 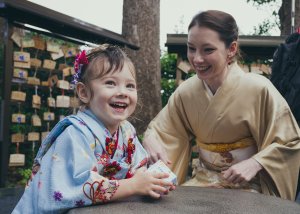 Food is also attractive. Russians mention Sushi when speaking of Japan. They want to know more about Japan, and I started a blog (instagram) to explain more about Japanese food.

In terms of geography, Russia is a vast country with flat land, whereas Japan has a rough terrain and you can see a variety of scenery in various parts.
We like living in Ota-city. We have a house in Toyama Prefecture, where we enjoy both mountains and sea not far from our place.

We love Japanese Matsuri, like 7-5-3 festivals, when my daughter wearing a kimono was certainly excited. Matsuri is thus inclusive and even foreigners can enjoy the atmosphere.

We love living in Japan; however, we are not Japanese and will not be. Although we are trying to appreciate the culture where we live as much as possible, we also appreciate our home country.

― Difference between Russia and Japan 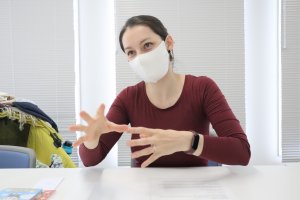 I used to see a variety of people in New York before coming to Japan. When I took the subway in Tokyo during the rush hours, there were all the same people with dark hair and dark eyes. At first, it was tough to recognize the difference when living in a homogeneous country.

I felt it must be hard for a single mother to live in Japan. It is like the stigma of being a single mother here. Russia and the USA are more accepting of them because there are diverse values.

Also, our Japanese house is cold in winter. We are used to central heating where the temperature in every room is controlled at a certain degree in Russia. 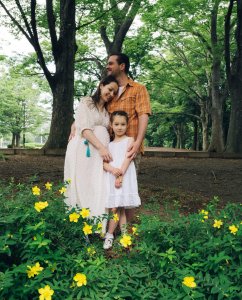 When I was in the USA, I learned from a book that the Japanese corporate culture is different from the USA in terms of working hours and hierarchy. When I was looking for a job in Japan, I was afraid to work for a Japanese company because of corporate culture and my Japanese. So, I worked for a small architecture firm owned by a foreigner.

Then, I got a job at major architectural firm and I am involved in an urban planning project in Russia. This global company has many foreigners and is trying to accommodate foreigners.

I had a disturbing experience when the training was given only in Japanese, but now they give an English printout.

We were forced to work from home during the Covid-19 pandemic. I was rather lucky to stay home and thus be closer to my daughter. I am on maternity leave until April. Now that I have a baby it would be great not to waste time on commute especially because i often times work late because of the time lag with Moscow where most of my projects are located. 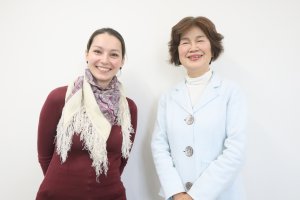 It has been nine years since she came to Japan. She used to live in England, Canada, USA before coming to Japan. She is a real international person and seems to be enjoying the difference in each country.
I was impressed that she understands well about Japan and likes living in Japan, but never forget where she is from and appreciate her home country.

It must be a busy life with a baby and career, we hope her enjoy Japan Life as much as possible.